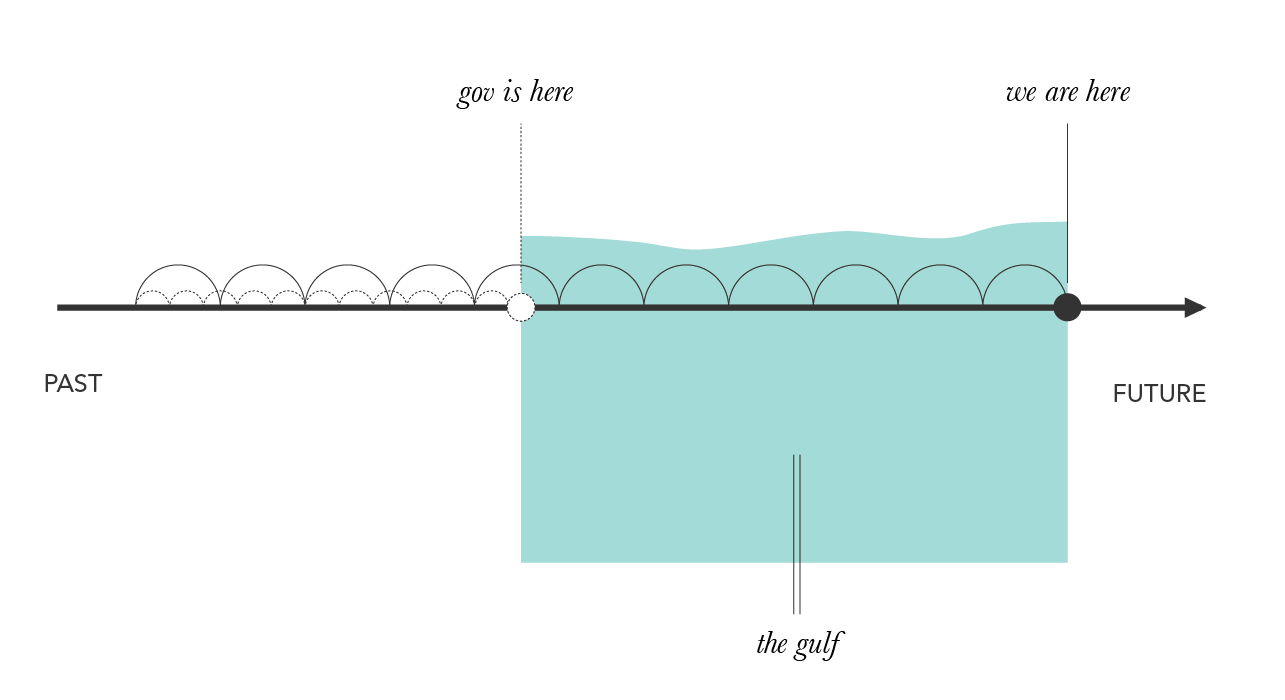 A year out of college and doe-eyed I started work in the public sector. Jaded by the starchitecture, design-for-designers mentality of my architecture schooling, I wanted to work at city scale and for the people. It wasn’t long, however, until I realized I wasn’t like most people in city government. A young go-getter, I was teaching coworkers the tools I’d been using throughout and before college; it was an office joke when, after a year and a half I asked for a performance review (a coworker said he hadn’t had one in the 15 years he’d been there). I began to work across departments as I was the only one who could do some of the things I could, and there was no one else I could ask, “Is this the best way to do this? Have you tried this new tool?”

After three years I was worried about the amount of non-learning that had happened in my time there, I was exhausted from trying to make change only to hit wall after wall. Luckily, this coincided with my meeting some 2011 Code for America fellows. Less than a year later I’d be in California for the first time and working on government technology from a different, and more personally satisfying, angle.

There is a great gulf between where we are as a society in terms of technology, connectedness and new efficiencies and where government sits in respect to the same. This gulf has become apparent enough that it is the subject of books, talks, fellowships – it’s now a movement.

While after almost 4+ years willfully in the trenches of government technology I have more war stories than success stories, I’m still optimistic. This is because we’re at a unique place. A revolutionary kind of place. For the first time we the people have the capacity to hold government accountable in a meaningful way. The tools we use in our everyday lives often empower us to understand our cites better than those at City Hall.

The movement is a result from the pressure the gulf places on government. Government hasn’t put pressure on itself to get better – this movement comes from the people. I believe we’re at the beginning of a sea change.

There are many reasons government hasn’t kept up: tight budgets, the expectation to be unflappable and the correlated risk aversion, siloed departments, aging staff and skills and the lack of competition. These reasons and more are being directly challenged by the fact that our lives outside of government have been dramatically changed by the technology of the last 20 years.

The open source community is thriving – there’s even an civic tech open source community. The software being built is good and if it’s not free it’s sold as a service for what’s still a bargain. It’s often continuously maintained – that means free upgrades. Why on Earth would a cash strapped city still shell out hundreds of thousands of dollars for long term binding contracts on software that’s probably out of date as soon as they get it?

Unfortunately, even if you get a city that wants to go the open source route, procurement standards hold them hostage and keep small companies out of competition with enterprises. People are working on that.

An even brighter area of possibility is all of the free services many of us take for granted that haven’t yet penetrated City Hall. I’m talking about making maps, charts and forms through Google, creating a website for a project or department on WordPress or Tumblr. Storing and cataloguing photographs on Flickr. These services are tried and true at this point, are free or almost free and best of all make it really, really easy to share.

The government must remain to some degree risk adverse – private information must be secure and City Halls mustn’t crumble. But there is enough room to play in to keep everyone busy for a while.

If New York City’s Broadway pedestrian zone hasn’t already made this clear: some street paint can go a long way. Low cost, temporary changes are a great way of making positive change or staying away from costly, permanent mistakes. And no doubt the quicker action makes for a happy citizen, too. A more agile government can benefit all.

Sites like Neighborland, Neighbor.ly and Better Block are full of many relatively (compared to typical city projects) easy to initiate ideas and some of the free services mentioned earlier can help facilitate prototype projects.

Competition : Be the Best!

Cities do not have to compete to be the government for the city. And if you’re not the Mayor there is a good chance you can keep your job for 20, 30 years whether you learn new things or not. So while private firms handling tasks similar to those of cities like urban planning, payments and record keeping kept on top of changes in standards, City Hall did not. I think this is a large part of why we are where we are today.

Be a more innovative, open and agile city than that other city. Sick as I am of these buzzwords already, I think the movement has finally given cities something to compete for, lest be publicly shamed and left behind. Hopefully in time the buzz-factor will yield real institutional change by promoting innovation and professional development.

I hope that this happens and eventually the insides of City Halls become more attractive to developers and civic tech becomes exciting for entrepreneurs.

It’s sad and it’s frustrating how many situations boil down to lack of communication or turf wars between departments (the former probably leading to the latter). If only staff and departments could contribute to databases, contracts and other documents the way programmers use GitHub. And! What if they were by default open source. At minimum, shared access across all departments for employees.

The best thing about the internet is the ease in which it allows us to share. Your friends on Twitter and Facebook may share too much, but nonetheless, social networks have made people and companies more accessible and accountable (if only for fear of Twitter storms). We want the same from our government – clear and simple ways to reach who we need.

I don’t expect or think that government should ever be on the bleeding edge of technology – that is not their role. But the current gulf is too great. I want a government a little more like the people: open source and distributed like nerds, agile and always looking to improve like a startup and connected and accountable like friends and family.